In Store Chracter Displays are Big Displays of the M&M Characters that are displayed in stores to promote M&Ms. They are like statues, But are A little smaller and made of a hard plastic. They have a hole on each side of them with Bags of M&Ms inside so that customers can grab a bag from the inside when they see the display. They also have wheels on the bottom of them so they can be moved easily. Each M&M Character Display is Standing on a base with three generic (not a character) M&Ms on it. The M&Ms on the base are red green and blue (again, Colors not characters)

So far, Every M&M character except Pretzel Guy have been Made into In Store Character Displays. These Include Red, blue, Yellow, Ms. Green, Orange, And Ms.Brown. Originally there were only Red and Yellow, But Ms. Green Was added Because of her popularity. Orange Was Made For the Release Of Pretzel M&Ms, And Ms. Brown is The newest One to Be made and was added Because she is the newest M&M character, and possibly to promote the find an all brown bag contest.blue was the first display that came out in 1995 to promote blue m&m. blue is The rarest and isn't seen to often, while Yellow is the most common one to see out of all of them.   Mini versions of the Red yellow green and blue Displays and were avalible to purchase.new red yellow and blue display came out. 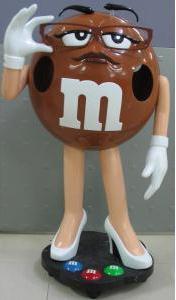 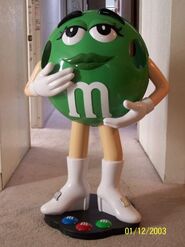 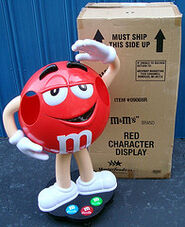 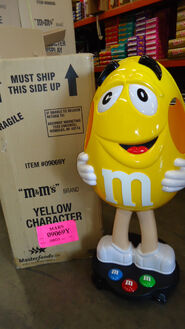 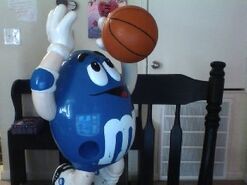 The Blue Display
Add a photo to this gallery
Retrieved from "https://mms.fandom.com/wiki/In_Store_Character_Displays?oldid=6012"
Community content is available under CC-BY-SA unless otherwise noted.