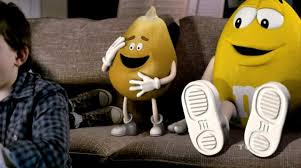 Popcorn Guy is a very special character because he is one of the only four characters from the M&Ms Brand to not be an M&M. The other three being Chocolate Bar, Caramel Piece Guy, and Pretzel Guy. He only was in a Canadian M&M Commercial from 2010.

A giant popcorn kernel that if it laughs too much he will pop into popcorn. He is the least popular and most unknown character out of all the M&M characters. This is probably because he has only appeared in the T.V commercials. An advert to promote free cinema tickets, and he isn't on any M&M wrappers and no merchandise has been made of him. This may change in the future though. He wears a generic pair of white gloves and white shoes that is kind of similar to the ones the male M&Ms wear. He also has brown eyebrows. He also has a P on his shoes.

Community content is available under CC-BY-SA unless otherwise noted.
Advertisement