Start a Wiki
Red is the main M&M character and the most recognizable. Over the 60 years that he has been around he has become the face of M&M's as a whole alongside Yellow.

Red M&M's have been around since the product began production in 1941, however, the character of Red would not appear until 1954. Accompined by the prototype version of Yellow, both characters lacked their personalities and their colours, as the advert was aired in black and white. In 1957, Red and Yellow would gain their characteristic shapes. The first time Red would gain his cynical and sardonic nature would be in 1995 in the first CGI advert made for M&M's. After this, Red kept this personality and has changed little over the last 20 years.

Red has appeared on the most packages amongst his fellow M&M friends. Not only has he appeared on packaging from his own chocolate flavour, but he has also appeared alongside Yellow on Peanut M&M's and with Orange on Pretzel M&M's.

In 1976, Red Dyes #2 and #4 were proven to be carcinogenic in nature. Despite red M&M's being dyed with Red Dye #40, Mars decided to remove the red M&M as to not scare the customers, replacing it with orange. Red M&M's finally came back onto shelves in 1987. 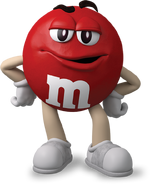 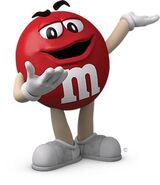 Add a photo to this gallery
Retrieved from "https://mms.fandom.com/wiki/Red?oldid=11593"
Community content is available under CC-BY-SA unless otherwise noted.